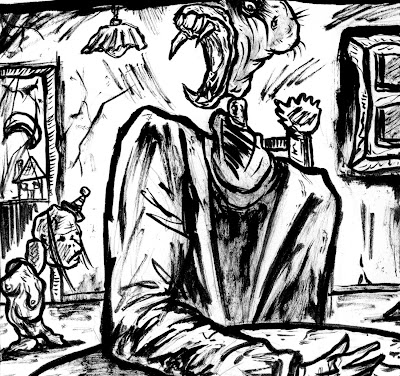 Below is a recent review from Optical Sloth of the first issue of Moral Geometry.

Wow. You know those reviews where I wander around a bit, rambling about various things before concluding that I don’t know what to say about a comic? There, I’ve just saved you three minutes of your life. I might have a point or two to make, but overall I rarely have any idea what to do with mostly silent comics involving widely interpretive art, or stories that are meant to be visually expressive more than they’re supposed to make any kind of literal sense. There are four pieces in this comic, and I’ll continue making a fool of myself by breaking them down. Note: the vast majority of my observations will be nonsense. Moral Geometry deals with a masked man, his dinner companion, a spoken monster, and death itself. The Birthing Process is the shortest piece in the book, dealing with the title subject and a profoundly creepy mother. Medicine deals with a struggle with a snake-like creature, the loss of a hand, and growing a new hand that is a pill-dispensing, happy monster. Finally there’s Rubber Face, which at least has words to give me a fighting chance, and it deals with a man putting on his rubber face, saying all sorts of things to a woman on the bus, getting shot in the head and having the result cause a bus crash. It’s not even fair to make this complaint, but the comic also literally has a weird smell about it. Like burning plastic maybe, or one of those scratch and sniff things gone bad. Overall, your mileage will vary with this one. I prefer my comics to make a little more sense, but if you prefer more of a challenge or enjoy trying to untangle interpretive pieces, this one may be right up your alley. Some of the individual panels of the comic were stunning, the problem for me was that when you put them together to make a story it had a tendency to splinter apart a bit. That website of his has more samples to give you a clearer idea of what I’m talking about, as I’m very aware that this is mostly going to sound like nonsense.

You can view a video trailer for the comic at: